Carrera are one of the most popular bike brands in the UK, due to their exceptional value and entry level prices. This is further aided by their distribution by Halfords; a firm favourite British retailer with over 400 stores with easy access and free parking.

In short, Carrera bikes are widely available, are competitively priced and are easy to purchase - hence their mainstream popularity. The Carrera ranges include both hardtail and full suspension mountain bikes, affordable road bikes, reliable hybrids, E-Bikes and kids bikes, with prices from £300 for the Hustle 1 MTB, to £1099 for the Vengeance Mens 2.0 E-MTB. 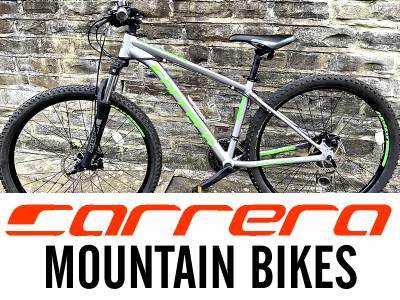 Carrera's range of mountain bikes are dominated by hardtails, with only a handful of full suspension models in the line up.

The vast majority of these mountain bikes feature alloy frames, 27.5" wheels, front suspension and disc brakes, with own brand finishing kit in order to meet their affordable retail price.

Several of their mountain bikes come with lifetime frame warranties, such is Carrera's belief in the strength of their designs. The majority of their MTBs feature quality components from such brands as RST, Suntour, Shimano & Tektro, ensuring a high level of performance for their line up.

Essentially, if you spend extra on the frame, the components and groupset will suffer as a result. That said Carrera have created the Titan, Titan X and Detonate full suspension models in recent years, providing cushioning for very little outlay. 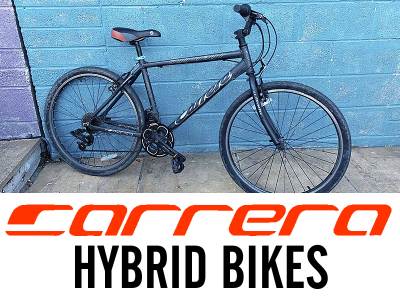 Carrera offer a large range of rigid and front suspension hybrid bikes, aimed at commuters and leisure cyclists alike. A hybrid will typically feature a rigid frame paired with either a rigid or a short travel suspension fork.

Both handlebar and tyre widths are inbetween that of a mountain bike and a road bike. This sums up a hybrid's purpose; designed for all round use, capable of gentle off road riding, as well as being suitable for miles on the tarmac.

Carrera's current line up of hybrid bikes include the Crossfire, a selection of Men's and Women's leisure bikes with front suspension and mainly disc brakes, with a few budget models featuring V braking systems.

The Carrera Parva are aimed at the budget end of their bike collection, with a rigid alloy frameset and V brakes for simplicity.

The classic Carrera Subways offer a similar specification, but with additional gears and disc brakes for superior braking. 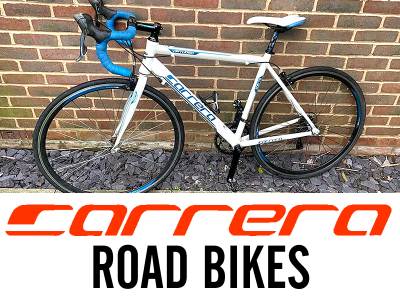 Carrera Road Bikes, as per rest of their bike ranges, are aimed at the entry level end of the market. That's not to say that they don't offer good value for money, just that you won't find any high end carbon Carrera road bikes.

A fair example of a typical Carrera road bike would be the Carrera Vanquish.

In recent years, disc brakes have been introduced for more predictable and powerful braking than traditional caliper brakes.

Wheels and finishing kit are Carrera own brand for budgetary reasons, leaving overall bike weights of around 10kg (22lbs) across the range.

So there you have it; Carrera's cost effective road bikes ideal for those starting out on tarmac. 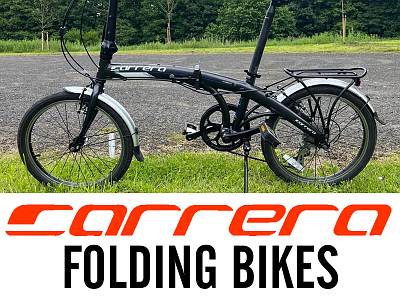 Whilst they might not have the same reputation and cult following as Brompton Bikes, Carrera have released their own folding bikes, the Intercity range.

Affordability is key here, with prices ranging in the £300 to £400 bracket.

As per most folders, the Intercity's feature 20 inch wheels, small frames which compact down with a standard hinge and quick release system. Think Bromptons on a budget, and you've got the Intercity Bikes.

If you can't find a Carrera to suit your needs, then it's worth checking out Pinnacle's range of bikes or Polygon from Go Outdoors; they're also competitively priced and are aimed at entry level British riders.

I also have a page dedicated to cycling clothing, including helmets & cycling shoes, and a bike parts area featuring components such as frames, power meters and groupsets.

I also have several sections dedicated to ranges by Pinnacle & Carrera Bikes, including the popular Vengeance, Sulcata, Karkinos and other Carrera Mountain Bikes, as well as hybrid ranges such as the classic Subway, Crossfire and Parva models.