The Sulcata range of hardtail mountain bikes by Carrera 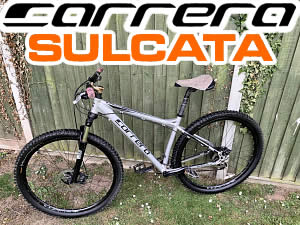 The distinctive looking frames are manufactured from alloy and include some nice design touches for an entry level bike range.

The Sulcata frame is braced by the crossbar and seat tube, and further strengthened by the curve of the downtube, which joins with the crossbar before meeting the headtube. These additional reinforcements contribute to Carrera offering a generous lifetime warranty for the Sulcata frame, so confident are they in it's bombproof nature.

Internal cable routing is standard throughout the range, for a clean look with less maintenance.

Talking of looks, the graphics are fairly understated, with subtle Carrera logos on mainly grey and blue colour schemes. Unlike many similarly priced models, the Sulcata's don't have the appearance of cheap bikes. 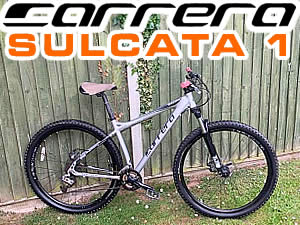 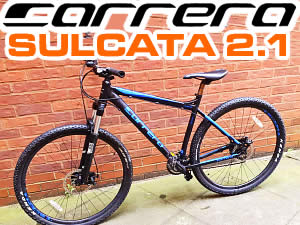 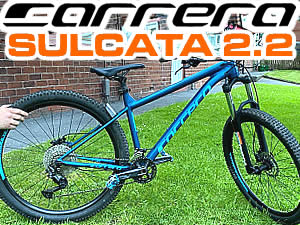 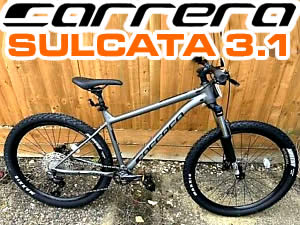 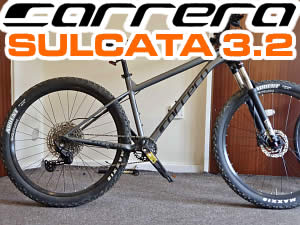 The rest of the spec.

Braking duties are handled by either Tektro or Shimano hydraulic disc brakes, with the suspension forks being mid travel 120mm models from either Suntour or RST depending on the bike chosen.

Wheels are 27.5" across the Sulcata series, with largely unbranded (or in-house) black hubs laced to alloy rims. It's impossible to include solely branded kit within the budgetary restraints of their line up, and so where money can be saved by using own brand components that's what Carrera have chosen to do.

So which bikes feature in the Sulcata range?

Each model features a numerical name, with the lowest numbers costing the least.

Let's start with the Sulcata 1, featuring the same alloy frame as the rest of the range, paired with a Suntour XCM fork with 120mm of travel and full hydraulic lock out. Flick a switch on the fork crown to deactivate the suspension when climbing, then switch it back to regain the cushioning.

The 10 speed drivetrain has a Prowheel Vortex double chainset with 22 and 36 teeth, coupled with a wide range Shimano M4100 cassette, ranging from 11 to 42 teeth. This should get you up even the steepest of climbs given the size of the largest gear (42) on the cassette. The Vortex 551 crank lengths are 170mm, which will be fine for all but the very tallest of riders. The derailleurs fitted are Shimano's reliable Deore M4100 and M4120 front and rear respectively. KMC supply the 10 speed chain.

Brakes are handled by Tektro, with their hydraulic HD-M275 disc brakes featuring front and rear. These are combined with 160mm stainless rotors, which in turn are bolted to a set of 27.5" own brand wheels.

Both wheels are quick release, with a 100mm width front and 141mm boost rear for additional stiffness. Double wall black alloy rims with Carrera branding are laced to the plain hubs - given the cost of the bike these are a touch on the heavy side, but will be stronger and require less truing as a result. Finishing off this wheelset is a chunky set of Mizt tyres, measuring 2.25" in width.

The finishing kit are all Carrera's own, including the black grips, 760mm wide alloy riser handlebar, stem, headset, seatpost and saddle. All decent alloy kit, cheaper but slightly heavier than branded components.

The Sulcata 2.1 - upgraded fork and drivetrain.

Next up is the Sulcata 2.1, which is fairly similar to the Sulcata 1, with a few crucial differences:

Firstly, the fork has been upgraded to a RST Omega, which although provides the same 120mm travel and lockout, weighs less than the Suntour XCM and also provides adjustable damping.

Similarly, the drivetrain has been upgraded to 11 speed, with the superior Shimano Deore FC-M5100 chainset with higher gearing of 36x26 compared to the 36x22 of the Sulcata 1. The M5100 cassette offers the same 11-42 range, but with the extra cog to choose from. Front and rear mechs are M5100 and M5120 11 speed models, and once again the chain is from KMC.

The braking is exactly the same hydraulic disc Tektro HD-M275 system with identical rotors, and the rest of the finishing kit is on par with it's Sulcata sibling.

To summarise, the Sulcata 2.1 costs a little extra for a superior RST fork and upgraded 11 speed drivetrain.

Costing approximately £50 more than the 2.1 we have the Sulcata 2.2. The fundamental difference between this and the 2.1 is the upgraded braking system.

Whereas the 1 and 2.1 both utilise Tektro's budget HD-M275 disc brakes, the 2.2 has been supplied with genuine Shimano BL-M210 hydraulic disc brakes for increased stopping power.

Asides from that, it's almost an identical bike to the 2.1 - so to summarise, pay a few extra quid to upgrade your brakes.

The Sulcata 3.1 differs from the rest of the range in that it offers a 1x11 speed drivetrain rather than 2x. Essentially this means that instead of the double chainset, front derailleur and shifter, it merely provides a single chainring.

This is combined with a wider range 11-51 teeth Shimano Deore cassette to aid climbing.

This 1x system is simpler to operate, as you only have one rear shifter, and also weighs less.

Again, it's around £50 extra to upgrade your drivetrain to 1x.

And finally, the Sulcata 3.2 costs the same amount as the 3.1, but with a few subtle differences.

Gone are the RST Omega forks, which have been replaced with a set of Suntour SF14-XCR 32 coil models.

These will weigh more, but are stiffer, burlier and capable of taking bigger hits.

The tyres have also been upgraded to Maxxis models, the same width as the rest of the range at 2.1 inches.

Below is a size chart for the Sulcata range.

You can see more Carrera Bikes, or check out more of their mountain bikes.