The Vengeance series of mountain bikes manufactured by Carrera

Here we have the incredibly popular Carrera Vengeance range, which started life as a single budget mountain bike, and has since expanded to include both women's and junior models, and in recent years the addition of E-Bikes too.

Due to the widespread availability of these mountain bikes from Halfords, and the low entry price, the Vengeance range is a firm favourite amongst British riders. 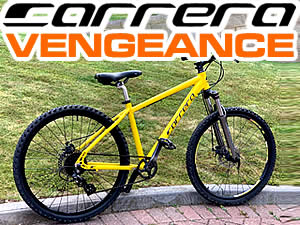 The majority of Vengeance mountain bikes are not used exclusively for off-road riding, as they are equally at home in the urban environment.

Essentially they're an affordable and reliable yet burly bike that can handle punishment without costing the earth.

A robust 6061 alloy frame, 100mm of adjustable suspension, chunky tyres and disc brakes lends themselves to a bike that's fun to ride yet can take a beating without breaking (or breaking the bank!). 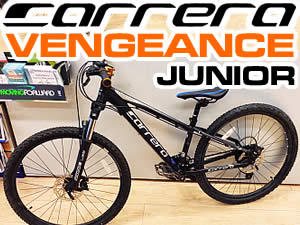 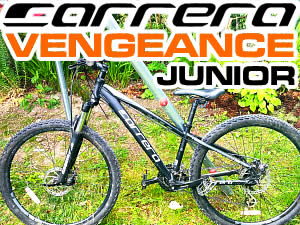 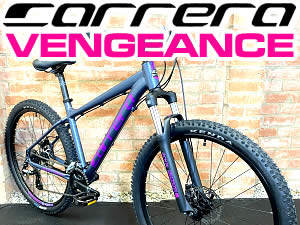 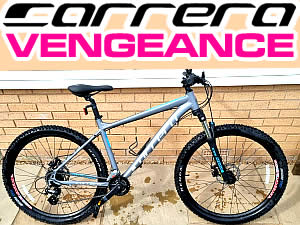 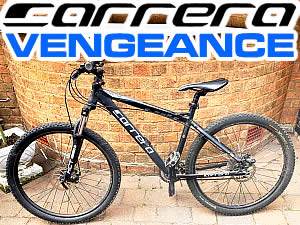 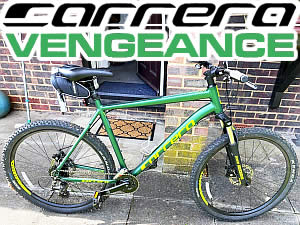 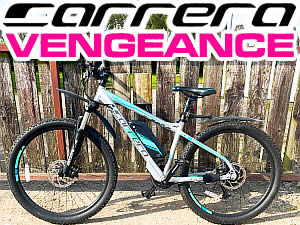 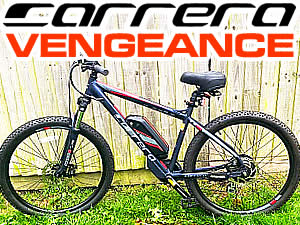 All of the models in the Vengeance lineup feature a similar 6061 alloy frame, from the shrunk down Junior models sporting a 26" wheelset, through the regular men's and ladies mountain bikes to the E-Bikes with batteries and motors bolted on.

The kids version (or junior as Carrera call it) features a lowered crossbar and is aimed at the 9-12 years bracket. It doesn't include the crossbar-meets-seat-tube gusset that the women's and E-bike models feature, presumably as children typically weigh less and consequently the bike won't be subject to the same levels of stress. It does however include the reinforcements under the headtube as per the older models.

Unlike the Sulcata mountain bikes, the Vengeance don't include internal cable routing. As a result, the bikes don't look as clean, but will be easier to maintain; no awkward cables to thread through tiny holes.

Brake hoses feed along the top tube, with gear cables routed along the downtube and under the bottom bracket.

Being hardtails, the Vengeance feature a rigid frame, paired with suspension forks supplied by Suntour. The reliable XCM 30 offers 100mm of adjustable travel. These models have steel stanctions, so it will be important to keep the bike dry when not in use to avoid rusting.

The rest of the kit

As per most of the Carrera bikes, the Vengeance keep the price competitive by supplying their own brand finishing kit. There's nothing whatsoever wrong with this, particularly in a budget range like the Vengeance, as it keeps the price low without loss of performance. These parts, such as handlebars, stem, saddle and seatpost may incur a slight weight penalty, but asides from that it's all solid kit.

The mountain bike's drivetrain is largely 8 speed Shimano Altus based, and X4 for the E-Bikes. All utilise mechanical disc brakes for helping to scrub off some speed.

With the Junior models, you have the choice of a triple or double drivetrain (two or three chainrings at the front), with the regular adult Vengeance bikes opting for a double and the E-Bikes offering a simple 1 x system.

As mentioned previously, all but the Junior bikes feature 27.5" diameter (650b) wheels, with the younger models featuring the old school smaller 26" size hoops.

Aimed at 9-12 year olds, the Junior Vengeance is essentially a smaller sized adult version, with a 13" frame and 26" wheels. You currently have a choice of either 2x8 speed, or 3x7 speed, with both Junior models finished in grey and black.

Asides from that, both bikes are pretty similar; 13" alloy frames, Suntour XCM30 forks, own brand components and 2.1" Kenda Kadre tyres fitted to unbranded 26" rims. Shimano provide the drivetrain with either their M310/315 Altus (8 speed) or Revoshift & Tourney (7 speed) ranges, and both models tip the scales at 14.9kg (32.8lbs). Not the lightest, but on the plus side they won't be lacking in strength. In short, they will be fun to ride and are built to last.

It's worth noting that if you can't justify spending £300+ on a child's bike as it might only fit them for a few years, then it may be worth checking Facebook marketplace or eBay for a second hand model; just as your child will one day grow too big for this bike, then so will many others. Therefore there will inevitably be a never-ending supply of second hand Vengeance Junior bikes, often in good condition and going for very little money.

Onto the adult models - Vengeance Men's

The Men's Vengeance mountain bike weighs slightly less than the Junior model despite being larger and costing a similar amount; 14.5kg (31.96lbs).

Currently available in a choice of black or green, this alloy framed hardtail is reasonably similar to it's smaller Junior, with a few key differences.

The main change is the increased wheel diameter of 27.5", as well as the larger frame size to accommodate both the larger wheel and rider. It is designed for adults after all. The fork is the same model of Suntour (the XCM30) albeit the 27.5" version.

Asides from that it's more or less the same bike as the Junior, just made bigger.

Grips, Bars, Stem, Seatpost & Saddle are plain black items courtesy of Carrera; it's more cost effective to use own brand parts on a budget mountain bike.

So there you have it; an ideal starter men's mountain bike for those who've either outgrown the Junior, or just want to get started into Mountain Biking.

And what about the women's model?

Just as the men's Vengeance has many similarities to the Junior model, the women's Carrera Vengeance shares many characteristics with both those models too.

After all, there are only so many changes you can make to a budget mountain bike.

Essentially Carrera have taken many of the same components, and fitted them to a female specific frame. Typically a women's frame will be slightly shorter and smaller, and this is the case with the ladies Vengeance. I've included a ladies size chart at the bottom of this page for those unsure of which size will fit them.

The frame features extra bracing when compared to the male version, with reinforcements added where the crossbar meets the steerer tube.

Asides from a ladies saddle, the rest of the bike remains faithful to it's male counterpart; 27.5" wheels, Shimano gears, mechanical disc brakes and Carrera finishing kit.

Now onto their new Vengeance E-Bikes

Carrera's electric bike additions to the Vengeance range appear fairly similar at first glance, apart from the £1000+ price tag. They look much the same as their cheaper traditional MTB cousins, but with a Suntour STL battery added to the downtube and Eco Rear Wheel Drive motor.

Incidentally, the battery has a 6 hour charge time, and is good for 40 miles riding. Also included are digital handlebar controls with 4 assist modes (Eco, Tour, Sport and the super fast Turbo) and a cadence sensor. All of these electrical components come with a 2 year warranty for peace of mind.

So what else do you get for your money?

Firstly, both the men's and women's Vengeance E-Bike have a simplified drivetrain with a single chainring (1x) up front; this does away with the front shifter and derailleur. The reasoning behind this is that if you have a motor assisting your pedalling, then you won't need the same low gears to climb hills as a regular bike.

Instead of Shimano, SRAM is primarily used for the drivetrain, saving a little weight and offering slight performance gains.

The fork is Suntour's XCT30 with 100mm travel, and the disc rotors have increased in size from 160mm to 180mm for extra stopping power. The bike does weigh more after all - 23.3kg (51.3lbs), nearly 20lbs more than the regular Vengeance.

You hopefully shouldn't notice this increase, as the bike will be taking the burden from your legs when riding uphill.

As per the regular models, the men's Vengeance electric bike is available in larger sizes, with a slightly more stretched out position to reflect male upper body and reach.

In terms of finishing kit, the E-Bikes have much the same parts as the regular mountain bikes; plain black alloy Carrera components.

Essentially the Vengeance e-bike is a slightly upgraded specification to the original Vengeance, albeit with a battery, motor and handlebar controls fitted for those who wish to take the sting out of the ascents.

Below are some size charts for the Vengeance range.